The intersection of Highway 97 and 22nd Ave is a four-legged signalized intersection, located in a commercial/institutional area in Prince George, BC. An average of 21 road users per year had been involved in collisions at the intersection from 2014 to 2018, with one case resulting in a pedestrian fatality in June 2018. The City of Prince George planned to implement various countermeasures expected to improve safety at the site. Transoft Solutions processed the before and after video using BriskLUMINA, an automated analysis tool that uses artificial intelligence and machine learning to capture near-misses and other safety indicators. True North Safety Group (TNS) performed a before/after analysis using the BriskLUMINA outputs to determine the effectiveness of the countermeasures.

The Eastbound approach on 22nd Avenue has two left turn lanes, and one shared lane for right turns and through movements. The signalization for the two left turn lanes changed from permissive to protected from before to after. Each side of the intersection is equipped with a marked pedestrian crossing area (Figure 1). The crossing time for pedestrians was increased from 15 to 20 seconds on 22nd Ave, and from 17 to 22 seconds on Hwy 97 from before to after. Pedestrian countdown timers were also added at the pedestrian crosswalks. 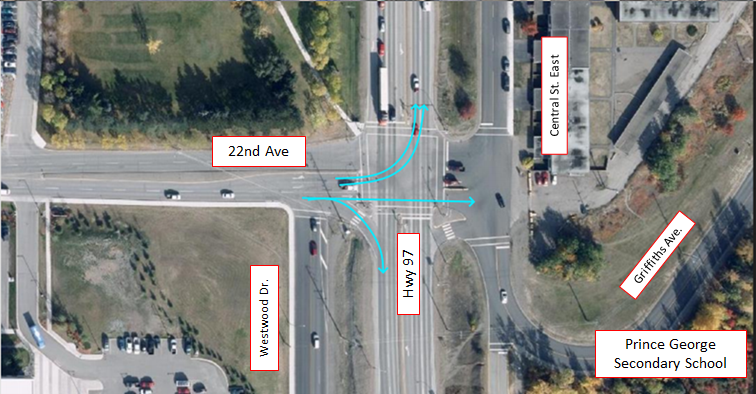 Figure 1. Aerial view of the intersection of Hwy 97 and 22nd Ave in Prince George, BC

The City of Prince George sent video from a permanent camera installed at the NE corner of the intersection to Transoft Solutions before and after the countermeasures were implemented. After calibrating the camera and defining the movements of interest, Transoft processed the 147 hours of video to obtain several safety indicators including post-encroachment-time (PET), vehicle speed, road user type, and road user arrival patterns.

Figure 2. A 16% reduction in through vehicle speeds was observed Before vs. After implemented countermeasures

A 7% reduction in entering vehicle volume, and a 16% reduction in through vehicle speeds was observed from before to after. The capacity and speed reductions are most likely caused by the longer signal cycle lengths implemented to accommodate the protected-only-left-turn phase.

As can be seen from the PET distribution below, the frequency of conflicts between westbound through and eastbound left-turning vehicles dropped from an average of 15 critical conflicts (events with PET less than 3 seconds) per hour to virtually zero (Figure 3). Therefore, the implementation of the protected left-turn phase was determined to be successful in improving safety between westbound through and eastbound left-turn conflicts.

Each point in figure 4 represents a conflict observed during the video analysis. The points are plotted using the Swedish Traffic Conflicts Technique (TCT), developed by researchers at Lund University in 1972. This chart plots interactions measured by PET before vs. after the change was made. We can see that despite recording video during similar times of day, and similar volumes, there was a drastic change in the number of high-risk interactions. There were 145 critical conflicts between eastbound left-turning vehicles and pedestrians crossing at the north crosswalk in the before period, while there were no critical conflicts for this scenario in the after period. This indicates that the countermeasures implemented were successful in reducing the conflict frequency between eastbound left-turning vehicles and pedestrians at the north crosswalk.

Figure 4. Conflict scatterplot by PET and maximum conflicting speed for eastbound left-turning vehicles and pedestrians at the north crosswalk

The implementation of the protected left phase addressed a major safety issue that can be illustrated in this before video:

In the before scenario, a left turning driver could pass another left turning vehicle in the adjacent lane that was waiting for a safe gap. As the visibility of the passing driver would be restricted by the adjacent vehicle, the collision risk with a through vehicle was substantial. This type of conflict was not observed in the after period.

Overall, it can be concluded that the implemented remedial measures were very effective at minimizing conflict risk at this intersection.